We launched yesterday. Having had a great experience with Grupo Naval Mar de Cortez boat yard, we said good bye to our new friends David Alonso Rice, Paul O. Mocino Rodriguez and the rest of the yard including a young man also named David who helped us all with translations and general information about the jobs being done. 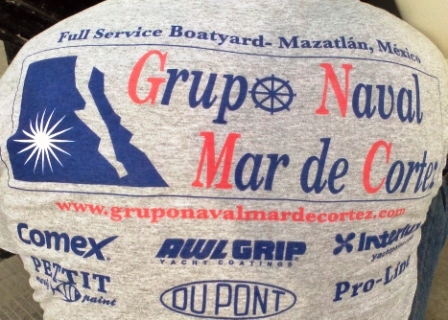 Yard work typically leads to surprises but in our case we contracted for a lightly sanded bottom, specialized anti-fouling paint, and a raw water pump rebuild. The original estimate actually was the lowest of three that we received over the last month of looking for yards. When we changed paints from the typical anti-fouling paints to the ablative anti-fouling paint we expected the yard would raise the price but pleasantly it remained the same. Perhaps the one surprise we did get at the yard was that we contracted for light sanding on the bottom but got a bit more than we expected.

Light sanding typically would involve removing small amounts of loose paint or rough areas on the hull. When we came here 5 years ago the same yard, but under the name of Carlos Yacht Refinishing/Grupo Naval Mar de Cortez, did such a good job that there really were no rough areas or loose paint. Even with a very clean bottom, Paul had a crew of two guys work all day to remove the last coat of paint that we put on the bottom a year ago before applying any new paint. At most other yards including those in the United States this would be a step that would have either increased the price of the job or would have been skipped. Paul was very detailed oriented and made sure that every last bit was removed and each underwater fitting was cleaned to bare metal before he applied the first coat of new paint.

The raw water pump was the spoiler for the whole job. We had looked up the price of a rebuild kits to be sent from the U.S. prior to asking Grupo Naval Mar de Cortez if they could rebuild it here in town. The cost from the U.S. was $139.00 plus shipping. If you read these pages you will know that shipping can easily exceed the price of the item shipped so we guessed that the rebuild might cost in excess of $200. This being Mexico anything is possible and $100 seemed like it might be closer to the final cost of the rebuild. De-installation and re-installation was not even on our radar as we figured they would ask us to bring the pump to the shop. Apparently service is still a sacred word for the folks at Grupo Naval and after we were set up in our yard stands they sent their mechanic out and he promptly removed the pump from the boat.

Last April Bill wrote about changing the impeller on the raw water pump which is just a small portion of the rebuild. From start to finish it took nearly 3 hours, with most of that time involved in the installation of the pump. When the pump was returned to us and installed we asked the price (as you know we are made of money so we never even considered the price before asking for the work to be done); total cost: $50 U.S. Bill never even got his fingers dirty.

All in all we had a good time in the yard (nobody ever has a great time in the yard.  Climbing ladders and constantly having dirt and dust on the decks is never a lead in to a great time). The job was completed in less than the four days that were projected, the price was very fair (even by Beyond Reason standards), and the people 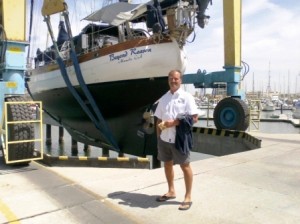 and service were above reproach which is something that can not be said about many other businesses here in Mexico. The final small piece of small bit of customer appreciation that you just don’t see much of anymore was when we were putting the boat back into the water. The Grupo Naval Company is co-owned by Paul O Mocino Rodriguez and David Alonso Rice. Paul and I had talked earlier in the morning and said our good-byes and thanks for a job well done. As the boat was being lowered into the water, David Alonso Rice drove out to the launching ramp just to say good-bye and to thank us for the business. He had no real reason to make the effort. We had talked a few times shortly in the last 4 days but other than that our relationship was purely just convenience. To have one of the bosses make a special effort even this small was priceless to us.

We hope to have our paths cross again when we come back down the sea at the end of the season.