We should have left today.   We both woke up early to get the boat prepped for departing south and eventually getting out of Mexico (per our exit Visa requirements).    The propane tank that we dropped off yesterday was still in Colimilla so Bill  had to fire up the dinghy early.  Sparky hoped in with hopes of visiting the beach one more time before we made our way south.   All was well and both Bill and Sparks’ returned about 30 minutes later.   Bill had additional good news as he had checked with the local fuel pump and they did indeed have diesel.

With the tide high we pulled the anchor which had been sitting in mud for the last week or so.   The mud casing required flushing off so retrieving the the 160 feet of chain took about 45 minutes to complete.   With the anchor up we turned on the GPS/Radar/Chart Plotter that we had just had refurbished by Garmin just 30 days earlier and after the Splash screen came up with the advertisement about it being a Garmin product, the unit froze. 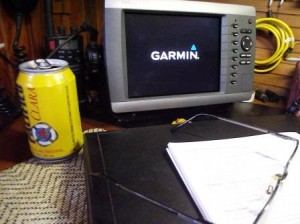 Typically we may not have been fazed by this but the trail in to the Barra Lagoon is pretty tight and veering off of it by just a couple of feet could put us into trouble, so we fiddled with the unit and eventually gave up.   The decision to drop the anchor again was made and frustration started to raise it’s head again.

We decided we needed Internet to try to solve the problem and 2 hours later we had discussed the issue with Garmin and had a potential solution.   Apparently this happens to some of the units so it was explained that if we held a glass of water in one hand, hit the up error with another and pressed the on button with yet another hand the unit could be forced to skip the Garmin Advertisement and move into functioning mode again.

Back on the boat, we put all our hands together and performed exorcism which appeared to work, but the last thing the Garmin rep had told us was to download the latest software (again) before continuing.    Of course this required a second trip into town for more Internet as the file was 107 megabits large.    Another 2 hours go by (Mexican Internet is not always quick), and Lisa decided to take the dog back to the boat and return with refreshments.

After 3 hours Bill was down to the last couple of megabits when his friends Jim and Susan came in to say hello, sort of.    What they actually wanted to tell him was that Lisa had hit a sandbar on the way back to the boat and the dinghy engine might have a bit of a problem (at this point the engine would not restart).   Unfazed Bill completed the download and then hitched a ride with Jim back to the boat.

Lisa was welcoming, in a shy way, with cold beers to try to keep tempers down, after all it was nearly 2pm now and the troubles looked like they were just starting to appear.   Ultimately the dinghy engine just had a bit of sand in the intake and it roared to life without any issues.

We did get the latest version of software loaded onto the chart plotter and it does appear to be functioning correctly but because of the late hour the tide had shifted and we no longer have enough water in the lagoon to exit safely so we will remain for one more day, or at least till we see what Garmin has in store us in the morning.