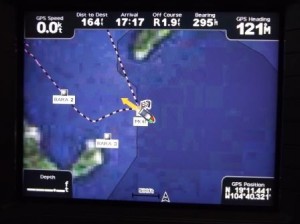 This is the Chart plotter when it is working correctly, you can see we are in the water and the shoreline as well.

We really do like our Garmin Chart plotter when it works.   The only issue with the system is that when it goes down we loose everything, Radar, GPS, maps the whole works.    A month ago we had problems with the brand new unit we bought in July 2012.   The unit appeared to overheat then loose all of it’s map information.    We were still able to navigate as the Radar worked and the GPS still gave an accurate signal of where we were.   This information could be transcribed onto a paper chart with ease and away we would go.

After involving a sales manager and an ex-marine electronics guru, we were able to have a new unit sent to San Diego and then brought down to us in Mexico.    It has worked for just about 30 days, most of that at anchor or in the marina.

Today, after fixing the problem with the “advertising screen” yesterday, the unit developed a new issue.   Although the unit is not warm, it is losing it’s map detail once again.    We called Garmin this morning and it looked like they would ship us a new unit.   3 hours later we received a mail from Garmin asking for photo’s and suggesting that it might not be an issue with the unit, but perhaps with the Garmin data card that shows all the mapping. 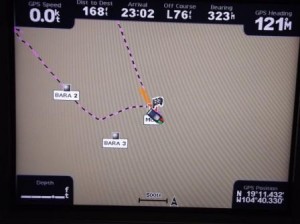 This is what the screen looks like when it doesn’t function correctly. Notice the shoreline is gone but the old track remains, as does the GPS position in the right lower corner.

As requested we sent photo’s.   Both of us have worked in customer service and what we are seeing now from Garmin is a failure to communicate even basic information back to us.   We have sat in the boat waiting for emails confirming that the pictures were received or that a new unit is on the way and have yet to see anything.  We are not yet ready to add Garmin to the list of Bad Companies to deal with (ICOM) but it is getting close.    It is frustrating to have 2 units go out, more frustrating when you are eating up time that could be enjoyed elsewhere, and double frustrating when you have checked out of a country and can’t leave or even tell when you will leave because you are waiting on a simple email.

Hopefully Garmin is working in the background so diligently that they don’t have time to keep us informed.  Hopefully.