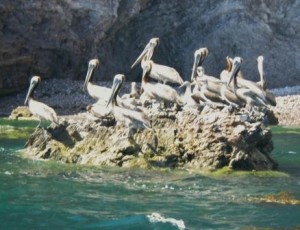 Pelican and Blue Footed Boobies hangin’ out in La Ramada

It looks like it will be another week or two before we find internet again. We found ourselves in a bit of a quandary yesterday. We had been invited to the far side of Carmen Island for a tad of scuba diving. After checking all our gear we got moving and within an hour discovered that the sea was running with at least four foot swells against us and toward the shore that we would be anchoring in. Lisa made the decision to abort the dive and head to another anchorage about 25 miles down wind and away from Loreto.

San Juanico was our destination and she figured it would be nice to take her kayak out for a spin amongst the little rocks and such in the small bay, good thought at least. As we sailed up the Baja coast line the wind grew to 20 knots and the waves continued to build a bit. It was actually a nice sail but when we arrived at San Juanico we discovered that it was completely filled with swell and we had to move around the point to La Ramada cove.

Having never been to La Ramada before, we hoped that they left the light on for us. Turns out the light is left on at Motel 6, not the Ramada. With seven boats already in the anchorage there was no room for us in the cove, so instead we opted to anchor at the opening to the cove in a large swell. We were happy to get out of the most of the wind and waves and were told the wind and seas would die after about 7 pm which they did.

Today was spent killing fish, kayaking and generally enjoying the anchorage. We are looking at a pretty heavy wind forecast coming up on Tuesday so are looking to either scoot back to Loreto tomorrow or continue our trip north to the Bahia Conception for the big 4th of July party. We know we will not stay here for the projected blow, so time will tell what we do next.

Summer is here and the weather is warm, mostly dry and very unpredictable, kind of like your work schedule. Enjoy your commute.