It has been an active week for us.   Lots of moving around, plenty of discovery, meeting up with old friends and making new ones as well.  The Dudes view has a couple of new updates which cover our trip down from Puerto Vallarta and the boat work that was completed there.   In addition we 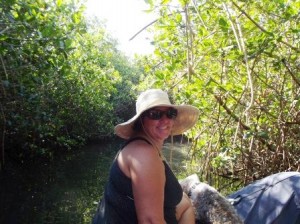 have done a bit of jungle travel in the dinghy, got the dog to the beach on a more regular basis and have now discovered the town of Bara de Navidad in southern Jalisco, Mexico.

One of the oddest things we have done in the past month was two nights ago as we were watching one of our last episodes of 24 (the Telivision series).   Jack was in some type of fix that only him or McGyver could get out of, when we heard a call for information from anyone who knew anything about snake bites over the radio.   We were in Tenecatita Anchorage and this was an odd enough call for even us to turn the TV down a bit to listen.    Apparently Rojo Ojo’s has discovered a snake on board when Keith (one of the owners) stepped into the salon and got bit!   At least there was not questioning about it being a real snake or fake since the blood from it’s “fangs” was dripping down his foot.

We were not the first to respond as we don’t really have any experience, but really neither does Obama and he is running the country so we called in a bit later to explain that we did have sharp knives and a venom extraction kit.   Terry (Keith’s wife) asked us to come over with the kit, and so we actually did become first responders (it really helps to have a fast dinghy).   When Bill got on board he was pointed to the snake which hid behind the stove of boat.   He is no herpetologist but to him the snake appeared menacing enough to require protective equipment.   As you can see from the picture, improvisation is one of his strong points and quickly they subdued the beast and promptly put it into a sack.

Lisa of course cheered the event from outside the cabin, but treated Bill like the hero he was when they got back home.   Jack subdued the next criminal and all was going right with the world again.

Take a look at the updates if you have time between stop lights.