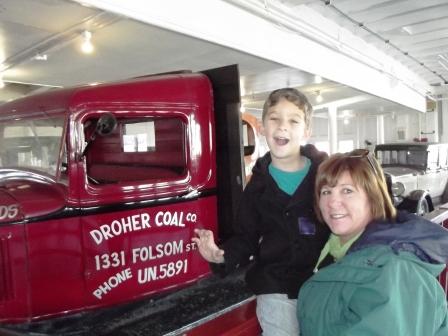 Well we have just about finished up the year here.   The introduction back to the USA was not without its challenges but we have had worse.   Having returned with little in the bank that we wanted to spend, we have financed our way deep enough into society to keep us in San Francisco for at least 7 years if not longer.

We are now part owners (the bigger half belongs to the bank) of a new Toyota Corolla for Lisa and a big Ford Diesel truck that Bill has wanted for years and Lisa insists we will need for Boon Docking later in the year.  Our financial encumbrance has brought an end our use of Bills brothers’ truck for transportation.  The truck did re-introduce us to all the reasons we really didn’t want to purchase an older vehicle.

In the three weeks that we used the truck (a total of perhaps 100 miles) we had the battery give out, two flat tires, an alternator that quite charging and needed replacement and finally another dead battery.   We were aware that the battery was a problem when we first picked up the truck so the first day we had the truck we took it in to have the battery checked out and then just replaced the battery.   The truck worked great for perhaps a day then on Lisa’s first drive around town in the truck (Bill has taken her new Corolla to work) she had a flat tire.   Being in town she just limped down the street and had it replaced.   The next day she fired up the ol’ truck and drove to the laundry mat.  Unfortunately the new tire she had just replaced sprung a leak and soon she was faced with either drying clothes or taking the tire back for a replacement of course she did the right thing and dried Bills underwear before going to the tire shop.  Following this episode she took her car away from Bill and forced him to begin riding the ferry across San Francisco bay to get to work.

With the truck now used for just getting Bill from the ferry to work, a total of 1 mile, the truck serviced us just fine until last week when the alternator gave out.   Another fix and the truck ran fine for 3 more days.  On Friday of last week the battery died again and that was the final straw, we purchased a new truck and returned big brothers truck to him.

Culturally we are just about there as well.   We have not taken on the trait of following our Starbucks coffee cups or cellular phones up and down the boulevard, but we are closing in on that.   We are pretty sure that the coffee cups will become bottles of water when the weather warms up a bit in March, but it is such a different sight to see people lead through the streets by an inanimate object.   When we think back to Mexico we can’t even remember people, other than tourists, who felt the need to have liquid containers in their hands everywhere they went, even in the summer months.

Surprisingly our fuel consumption and maintenance have not gone down since we arrived in California.   With the cool temperatures we have had in San Francisco we continue to run through about 40 or 50 gallons of diesel each month just trying to keep the inside of the boat at about 75 degrees.  Unfortunately the fuel at the marine pumps is $5.58 per gallon, so it is going to be an expensive couple of months.  We are trying to keep the engines and everything else on board running and lubricated and that resulted in us discovering an overheat problem with the generator.  Seems the heat exchanger was just about to depart us in Mexico and since we didn’t stay there we discovered that it was clogged up during one of our weekly engine runs.   It is currently in San Leandro working on a $150.00 facelift.   To add to our list of items that we don’t use much in San Francisco but have decided that the better part of neglect is decay, our forward water tank needs replacement as well.   On the up side the heater, windless, wash-down pump, bow thruster, water maker and just about everything else are working at peak performance. 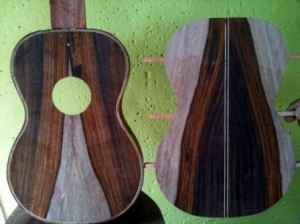 Also at Peak performance is yet another Ukulele for Bill.  Lisa swears he has either adopted Kevin Keith (The Director of Marketing in Nicaragua) or has joined the Uke of the month club.  It’s a strange fascination he has with the instrument, but at least he stays at home and out of the bars.

Silvio Conto is the Nica Tiki companies head Luthier and Bill has asked them to build a Ukulele with a 100% Nicaraguan Cocobolo top and back.   He has also asked them to install tuning pegs called Peg Heads which is a product that Nica Tiki has never used before. 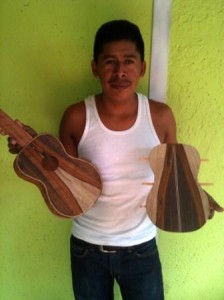 According to Bill these “tuners” look like the pegs you would see on an old fashioned Ukulele but they are geared inside…High Tech for the Beyond Reason crew.   The guys at Nica Tiki seem to be almost as excited to build the Uke as Bill is about getting it into his “Uke Stable”.   We have included a couple of pictures of the yet to be finished Uke.   The lighter wood is the sapwood of the Cocobolo, we think the contrast of the natural wood and the way that Silvo has matched the two sides of the Uke really set it apart from anything else we have seen before.

We better get this posted before 2014 beats us to the punch.   Have a great New Year.