“The boat is sinking”.   It almost sounds like the battle cry on Beyond Reason.   We don’t know how many times in the last couple of years we have declared that we were sinking, but it doesn’t raise the heart rate nearly as much as it use to.   At no time have we ever really felt that we were in need of launching the life raft. This time was just like the rest; the bilge was cycling once an hour or so, we could see water flowing into the low areas of the boat and there was a disturbing feeling that all the dust bunnies under the engine would soon be swimming for their lives if we didn’t do something.

The timing is never right for 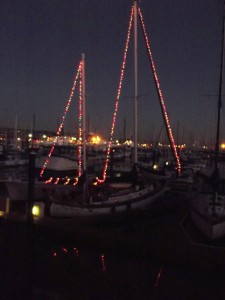 these types of fire drills and Bill had just finished putting on his tie and shinning his brogues when we noticed the bilge pump was running.  Even dressed in his finest Fork Lifting togs he knelt down and began to investigate where the water was coming from.   It didn’t take long for his assessment:  “It appears to be coming from either the drive shaft (the back of the boat) or somewhere up by the engine or water tanks (the front of the boat)”.   An astute concrete answer as expected,  but at least we knew if wasn’t coming from the top of the boat unless of course it was dripping down the sides and into the bilge.   Regardless he needed to get to work and the inflow didn’t appear to be able to sink the boat during the next 24 hours, so the bilge would just have to be monitored and hopefully Lisa would not have to resort to using the bucket to keep from soaking her espadrilles and capris.

While Bill was at work Lisa began to weave our lives back into society.  She scoped out the car market and decided we needed a used Ford Fiesta based on our budget.  She also contacted the phone companies and made another major choice in selecting our internet coverage.  The plan has almost succeeded, but she has had a hard time locating string long enough to connect our empty can of creamed corn up to the local telephone lines.  Even today we are still working on solving this last piece of the puzzle.  Trying to get DSL or even phone service down to the dock seems to be quite a chore for AT&T even though the dock box is already wired for service.

Not much has changed since Mexico except the conveniences we once enjoyed.  Propane, which fires up the kitchen stove is more difficult to find and Bill’s understanding of the English language failed to alert him to the “minimum charge” at the one station we found who could fill our tanks.   A $5 charge in Mexico suddenly cost us $16.25 here at home.   The local grocery stores are miles from the marina so recovering food cost us a $10 cab fare.   We really started to miss the cabs in Zihuatanejo where $2 got you all the way across town and that included the tip!

Bills commute, which we had hoped being 50 miles closer than the last time we lived here, has not decreased by that much.   What use to take between one and half hours to three hours, is now taking just sixty minutes, so we need to find something for him to do with all that spare time.  The good news is we did find the money to upgrade the Ford Fiesta to the Toyota Corolla, so at least he has a radio (optional equipment on the Fiestas we were looking at).

The laundry situation has changed a bit also.   Long gone are the days when we could drop off two weeks of stinky clothes to some nice villager and return 3 hours later to clean, folded and bagged linens.  It took Lisa two hours of scouting to finally find a clean laundry mat. With the proper laundry mat located the ordeal still was not over with. If you can believe it she had to do the laundry herself and she had to pay $15 as well.  $15 is just about two dollars more than having it done in Mexico. Her life of leisure suddenly came to a halt.

When Bill got back from work we began to narrow down the list of potential leaks and although it was a slow process that continued for several days we finally discovered the problem when we ran the forward water tank dry and suddenly the bilge quit running every hour.   Having never replaced the water tanks we probably could have assumed it would be the next item on our list of replacing every piece of equipment on this boat since leaving Mexico, but at least it is accessible.   Accessible may be too light a term as we do have to remove the dinning room table (bolted to the floor), remove the settee (or couch), unscrew a bunch of floor boards and then just disassemble a couple of transverse stringers (wooden cross members that hold the boat together) and pull the tank.   Not being able to live with a messy boat we will then re-assemble everything and wait for a new tank to be custom made and Viola! We can dis-assemble everything again to install the new tank.  Hmmm…”Sundowners and Sunsets in Mexico”, …”Sundowners and Sunsets in Mexico”, …”Sundowners and Sunsets in Mexico”…where are my ruby slippers.

We did get the Christmas lights up on the boat yesterday so we figure Bill’s gain of 30 minutes on the commute time helped out in that regard.  We will continue to pool his time savings and hopefully one day we can come up with enough time to find a land home.  Until then enjoy where you are and we hope all your commutes are short.