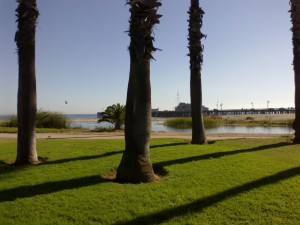 You certainly practice your patience when you are cruising.  We have had so much time to wait around in Santa Barbara that we even  found a place to buy a $5.00 lunch that was filling and was, you guessed it, $5.00.  Having not come from a fast food place was a bonus and being available at the wharf made for a pleasant dining experience as well.  Lisa was able to locate a picnic table right next to the rail-less edge of the wharf after picking up our Fish and Chips from Moby Dick’s restaurant while Bill gathered up a couple of root beers from the bait shop.  Total meal cost was $12.00 for two.

We are still having a tough time coming to grips with California law.  We know you must wear a helmet if you are under 16 years old and ride a bike. Being real children of the 60’s we both know that falling off of bikes can be great life lesson with some potential danger but still feel it is up to the parents to either figure the gene pool will separate it’s own layers, or force the helmet on to their own kids head.  There is no reason for the law, but if the law is made, why not be consistent.

There is a skateboard park not far from the boat.  It is concrete, loaded with jumps and rails and every type of “hazard” you could possibly throw in front of your “under 16 year old kid”, but do you think you need a helmut, nope. We didn’t see one child or adult in this popular park sporting anything thicker than a regular stocking cap while hurtling through the air or sliding off any of the 3′ high rails in the place, Darwin do your sorting!   The wharf we had lunch on is another example of inconsistency.  Here is a tall structure with water deep enough to drown in just below it.   I would think rails would be a requirement, yet at the farthest end of the dock there are no rails, you could roll your stroller right off the end without any interference.  Way to go California.   The guy at the bait shop mentioned the lack of railing as being the only reason Bill could not buy beer.  Apparently the city counsel figures it is only people that drink beer that could possibly walk off the end of the peer, well that and it is a lot cheaper to give up the alcohol revenue received from a couple of thirsty fisherman than it would be to put railings up around the entire wharf.

The Chick has updated her site, so if you made it this far and are looking for a bit more casual reading and some photos, shuffle over to the Chicks Version and have a look.

We are still watching the weather, but Sunday looks good for departure.   Northern California get ready.