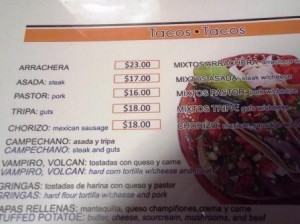 Campechano is always a hometown favorite.

The weekend didn’t turn out quite the way we planned.  On second thought it may have turned out exactly as we planned which was to be able to find a mechanic for the pump and with a little luck get it back on the boat and working by Monday.   Today being Sunday we can tell you that Hugo the mechanic who we borrowed from a Sardine Seiner here on the docks of San Carlos thought that he would have the pump back on the boat today.   He and three of his amigos came on board the boat yesterday after a pretty fun ride out in the dinghy.  Hugo is pushing 300 lbs.   I am a cool 200 and his two amigos cast up about 150 lbs each so the dinghy was heavy.  Because of the late start the waves were up and we did everything we could to keep from being overwhelmed by the 2 foot chop.   Once the boys were on board Bill showed Hugo the schematic of the pump and he quickly ascertained that because of the difficulty in removing the pump pulley and some tell tale signs of “Hammer Damage” on the shaft that the porcelain seal was most likely cracked or  broken when the pulley was installed in Mazatlan.

Bill was able to attest to the fact that the mechanic did take a soft hammer to the pulley on installation, heck; he probably would have taken a big hammer if he had had trouble with the pulley, but then again he is just a glorified fork lift driver.

This morning we met with Hugo as he was back on the Sardine boat and he showed us the bad news via some cell phone pictures which precluded him from returning the pump today.   Although neither Bill or Lisa can really see without glasses, the pictures, arm gestures and facial features on Hugo explained that the shaft was damaged by the cracked seal and there was some other damage that looked to have been caused to the main pump housing by something, all was “muy mal” according to Hugo but in an instant he changed his face and said that he would have the pump back to us tomorrow afternoon.  Apparently Sardinina’s work on Sunday but the machinists and parts specialists don’t and the shaft needs to be milled or touched up prior to installing the new seal.

So we have set a meeting 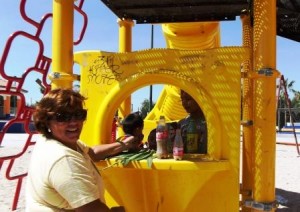 for tomorrow at 3 PM.  With any luck that time will be firm and it will still give us a chance to leave Magdalena Bay before the sun goes down.   The town of San Carlos could not be more charming to us.   There is one main paved road, many nice restaurants or perhaps we should say small, clean and cute mom and pop restaurants, helpful people and friendly towns folk.   Lisa spent a bit of time with the children in the park and probably made their day when she purchased a bag of chips and two sodas from a group of kids who were pretending they had a Tienda selling sodas and the like.   Of course the soda they were selling were old pop bottles filled with sand and some empty chip wrappers that were filled with sand as well.   I think she spent 1.5 peso’s for our snacks but the kids were smiling just the same as they counted their loot.

The town does boast two or three expensive restaurants as well.  During a rare Bill and Lisa tiff, Bill took the opportunity to drop off laundry and duck into one them (The Alcatraz Hotel) for a soda.   He and Lisa had planned to visit the restaurant later in the day but after viewing the prices ($120 pesos for 3 fish tacos), he decided to do his dinning elsewhere (upgraded to Shrimp tacos and a beer for $80 pesos).   The ambiance at Alcatraz was very nice and he is sure that dinner would have been splendid but after blowing $300.00 U.S. on the pump rebuild (pay in advance and hope) we are watching our ducats just a bit more.

Tomorrow we have most of the day to ourselves.  This area really could use about two weeks of exploration but we are on a bit of a schedule, i.e. when the weather says go, we need to scoot, so we will do a whirl wind trip around the local beaches in the dink and get Sparky a bit worn out prior to our departure around sundown.  There is really nothing we can do until the pump is in.  The rest of the work is putting the dink up and tying it down.  After that we light the fires, kick the tires and hope to goodness sake that we have been good all year and somebody wants us to make Turtle Bay by Thursday.  Time will tell, luck is usually standing close to us but never wants to let into whose side he is on till the end.

One last quickie thing.   In the last two days Lisa and Bill have been wandering the streets of San Carlos.  Apparently Americans are a bit of a rarity around these parts.  Twice in two days we have asked some adult for directions in our best Spanish and when we spoke a child close to the people we have asked shouted out “Gringo!”   They shout with the excitement of somebody yelling “Ice-cream”, “Ole’”, “Goal!”, “Mazzeltof” or even “Bingo” and it is always startling to Lisa but makes her giggle afterwards.  Viva Mexico! It is fun to be noticed.