We have had some time to rest 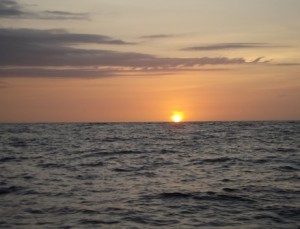 now and thought we would give our report on the trip north from Cabo.  This is supposed to be the best time of year for transit up the Baja coast.  Even when it is not the best time the first stretch (what we just finished) is supposed to be the most benign.  We picked our windows based on the expert opinions of both industrial and amateur endeavors and got pastes twice and then found something that we could at least get started in.   All in all the trip was survivable and we are sure many others have worked through much worse.  We are thankful we have a big heavy boat that makes even the worst weather bearable.

The first of the three legs of this trip was OK.   Winds were a bit high and the seas were not flat but other than that we encounter no problems and Lisa was able to make breakfast while underway without an issue.   Just outside of North end of Cabo Falso the conditions moderated and the middle section of the trip ticked over like most any other overnight trip.  We ate well, bobbed around a bit but generally made good progress.  Actually our progress was about average for most voyages along this stretch and perhaps even a bit fast.   The problem with fast is it set us up for passing Punta Tosca at noon which is in the “NO, No” time frame.   We prepared for a rough bit of waves and wind and as usual got just a bit more than we thought we could handle.  Bill says his friend Jesus does that to him all the time, testing.  Jesus generally gives Bill just a bit more than he can handle comfortably to see if Bill will use his name in vain.  As a bit of insight, Lisa has rarely heard Bill use Jesus’ name in vain but he does get in heated argument with the fella fairly often.

Tosca has a number of issues that we as first timers didn’t realize.  Number 1 is we miss read which piece of land was Tosca to begin with.  This was not a navigational error but more of a “oh, it’s that other piece of land over there” type issue.  What this lead to was us pulling away from the mainland before we actually wanted to which added to the amount of time we were stuck in the rough waves and wind.   Had we stuck closer to land for another 10 miles we are certain our trip would have ended well before midnight last night.

The second issue at Tosca is the tide and current.   We had ridden the counter current up the coast most of the way.  The typical direction of the current is from North to South, but by sticking to the shore we were able to find an eddy effect that either reduced the current to zero or gave us a bit of a shove up the coast.   When we left the Baja coast early we found tidal current coming out of Mag bay that set us south, a current that naturally wanted to set us south, wind that was blowing from the North that set us south and waves that were travelling south that would just as soon roll us over as take us south.  So after leaving the coast and traveling mainly west to get a good angle of sail for passing the point we found ourselves, well south, not good for going north.

Of course the third issue with Tosca is the wind.   Each of the points along the Baja have an increased wind factor (the Cape effect, look it up if you like) that accelerates the wind around the points by something like 10 to 15 knots.   Punta Tosca is no exception and if the true wind was blowing 18 knots yesterday then the wind around the point was accelerated by almost 20 knots as we saw steady wind for a couple of hours of over 27 knots with a top gust of 32.   Our only thankful area, in these winds, was that the swell was down so the wind waves on top of the normal swell produced average waves of 6 to 8 feet with the occasional sets coming in at 10 to 12 feet instead averages at 10 to 12 feet.  If  you have never had the occasion to be on a midsized sailboat in waves like this we suggest you check out the post that the Dude wrote back on 24 November 2012, the description is pretty accurate.

So hitting Punta Tosca after noon is a proverbial ‘NO, NO’.  Ultimately we spent the next 7 hours in increasing winds and waves and making progress at about 1 mile per hour, though we must have motor sailed nearly 30 miles in those 7 hours.   We discussed options but on this coast the only true “cover” we could have gotten would have been back at Cabo or just drifting with the wind for a while then having to recover all the distance again.  Lisa was having none of that so we plunged headlong into the seas with spray covering the boat at every wave, the bowsprit spearing itself into the larger surf every couple of minutes and regular visits by boarding waves on the quarter hour.  This continued from 3 pm till nearly 7 pm when the winds finally dropped to about 23 knots and things began to settle down.  Heck, dinner in those conditions came out of the galley as Meatloaf with veggies and rice, 23 knots aint that bad after 30.

We hallucinated our way into Magdalena Bay. 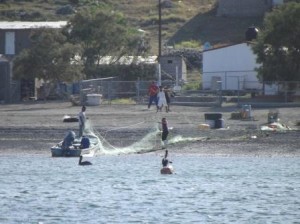 Bill had been up for almost 48 hours and Lisa wasn’t in much better shape.  Arrival into Belcher Cove was something like, “Hey Bill should we really be dropping the anchor here, I think I see pilings right behind us”.  “I’m not looking behind us Lisa, I am looking at you to tell me you have dropped 150’ of chain, are you done?” “What about the pilings?” “Lisa, I can hardly see the instruments in front of me, we will worry about pilings tomorrow, I am off to bed”.