Well the fourth of July celebration is over.   Geary the weather guy put on another good picnic, but like he says, “It’s hard to screw up a picnic” which is why he doesn’t throw parties. 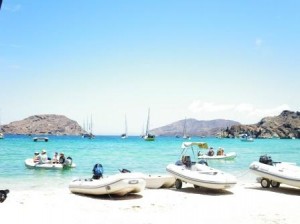 We had over 30 boats attend this year and when you consider each boat had 2 people on it and some had as many as 5, the shade tents and beer vendors were busy all day long.

The celebration started about noon and went well past 10 on the beach.   The highlight for most was the “insane” and “unsafe” fireworks display.   It started with just a few bottle rockets but when Dan on the Union Polaris 36 added over a dozen 2” rockets to the mix things heated up pretty good.   Most of the rockets shot into the sky and bursted into a star spangled banner, but Francis Scott Keys never wrote about the low altitude ground burst that we witness with people scattering for cover while whooping with joy and giggles.   It helped that most of the folks senses where dulled just a bit by the consumption of alcohol throughout the day otherwise the place might have broken into a pandemonium of screams.   We are quite certain nobody was hurt all day.

The final act of the day was given by the fleets own fire-eater and showman, Pitt, aboard KarmaSeas.    He put on a dazzling display of human torch pyrotechnics and we all hope he recovers well from the slight ingestion of kerosene.   He’s a professional and earns his living this way so we are sure he too will be recovered by noon today.

This morning you could tell there was

a bite of extra partying that went on after hours.    We woke about 0730 but didn’t see a soul till nearly 0900 AM.    On any given day folks would be running about the beach or in dinghy’s long before we even cracked and eyelid.   With the waking we have the normal events that follow a good gathering of boats.   A couple of Batteries were dead, people waking up on boats that didn’t really belong in, chains clattering as some people made a fast exit to beat the throng of boats that would soon follow or to avoid the embarrassment of the previous nights antics, and of course the gatherings and recounting of the previous days events in the cockpits of many boats.   By noon we expect that most boats will be well on their way to departing and the season for moving up north will have begun.

We are staying put for a day to enjoy our last time in the Bay of Conception for the foreseeable future.   We will not be following the many boats that move up to the northern sea, but will instead turn south toward Carmen Island again.   Lot’s of mixed feelings for the crew of Beyond Reason, but we think we know what we like and so will say goodbye to many of our friends and seek out new ones in the Loreto area.

It has been a hot and sweaty couple of weeks here in the “Bay of Celibacy” but it is time to move on and find the next fun time which must be just around the corner.