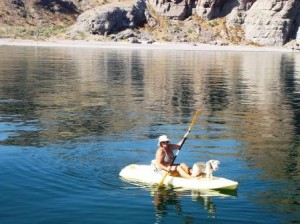 Lisa and Sparky celebrating the good life on Baja.

”You don’t have to dog it down like a submarine”, Bill was telling Lisa. The wind had risen from 5 knots to nearly 18 in a matter of minutes. Well perhaps it was a matter of 20 minutes since Bill was mostly asleep while on watch today. We had decided to at least close down the port holes ( windows in Lisa’s world) since the waves were starting to build a bit and most likely the boat would get a bit of spray which could enter through one of the windows.

Always looking to speed up an operation Bill didn’t believe it would get that wet and just figured shutting the ports would be enough to keep the arrant wave out of the boat, no need to go overboard tightening the dogs (latches in Lisa’s world) with a spanner wrench. Perhaps 30 minutes later (everyone was awake during this time), the wind began blowing as their friends describe as blowing like stink. Lisa and Bill are a bit more mindful of their metaphors and have no idea what stink blows like so when it gets a bit nasty out they like to say it Blows like Eight is enough, the old TV show from the 70’s.

So thirty minutes later the wind is driving into the boat at 26 knots and increasing. The waves had gone from a sea that you could see the moon shimmering on to six foot wind waves at close intervals; it was going to be an interesting morning. They were just passing Isla Cerralvo. The island is the entrance to the Cerralvo channel which is notorious for funneling winds and waves into exponentially greater forms than they start off as in La Paz.

Today was an exceptional day. If you know San Francisco Bay and the area called the Slot, the Cerralvo channel opening is 5 times the width (nearly 20 miles) and with at least 5 times the amount of fetch (what allows waves to grow to their full potential in height). Interspersed where several rogue waves that could be as much as twice the height of the normal six foot waves which are large enough to send a boat leaping off their shoulders if hit square. Luckily Beyond Reason was driving nearly directly (square) into them.

Sometime around 9 AM the waves were really coming at Beyond Reason and it wasn’t long before she took a large one on the deck. The scuppers filled completely with water and beings that the scuppers are 8” tall by about 14″ wide, the port holes were completely submerged and the boat was carrying about 100 gallons of water on deck or 800 lbs of additional top side weight. On a Hans Christian, most of the water in the scuppers needs to funnel down a 2 drain pipe (one on each side). If you can imagine how long it takes to empty a 50 gallon drum of oil using the normal bung hole you get the idea of how long these port holes were actually underwater, or more to the point how many minutes we were a virtual submarine. From inside it looked like the Captain Nemo ride at the original Disney Land. All that was needed were the plastic fish on the outside of the port holes.

Throughout the next 3 hours Bill and Lisa enjoyed the Nemo ride another couple of times. Lisa swears she saw a dolphin swim by the port hole but she was tired from her night of eating Bon Bons while Bill drove so you never know. The engine prepping done in Mazatlan really helped and with a reefed main, allowed for about 4 knots of headway.

Sometime around noon the channel was behind Beyond Reason and with only 30 more miles to go there was a celebration. Part of the celebration was in not losing anything over the side and only twice filling the cockpit with wayward waves. Lisa silently celebrated that none of her port holes had leaked while Bill’s were not quite as water tight until Lisa re-dogged them to submarine mode. How was your commute?