We figured we better put in a quick update about our crossing from Isla Cedros to Fondaedero San Carlos. Unfortunately we have to keep these Ham updates short or they get truncated. Since we made the trip mostly at night and beings as there was a lot of overcast last night the trip was pretty boring. We were supposed to be able to see Venus, The Moon, Mars and perhaps even some new and yet unnamed planet last night but all we saw were clouds. For the most of the trip we had smaller seas and 15 knot winds. Around 3 AM the winds kicked up to the mid 20’s and the seas filled in to what we had hope they would not which was between 6 and 9 feet at about 10 seconds and we had a brief rain-squall. It sounds worse that it actually was and we maintained good speed though most of it. Our oil leak never stopped but when we checked it here in the anchorage we lost an undetectable amount of oil so we will most likely let it go till Ensenada. We have all the parts but breaking stuff that works is one of Bill qualities and so we might be best just to live with it. It took 17 hours to transit the roughly 80 miles last night. We have about 50 miles to go to San Quintin, another 100 to Ensenada and then 66 or so to make San Diego, that’s a long day trip, and overnight and a Whoopie we are back to the land of plenty sail for us. Shouldn’t take us much more than a month to complete.

Well we have made another milestone. 450 of about 700 miles of outer Baja Coastline have been put behind us. Our location as expected (perhaps even a day early) is Fondeadero San Carlos. If we thought Hipolito or Abreojos was remote or windswept we just hadn’t been to FSC. The wind in the anchorage is only blowing 20 knots but the barren landscape and the winds ability to kick up water makes it seem like the wind is coming at us at 40 knots. The wave protection is not much either. This is the first time we have felt we could actually surf to shore from the boat. It is not rough but every couple of minutes a huge wave will pick up the boat and slowly raise it perhaps 6 feet before gently setting is down again to deal with the smaller wind waves that infest this anchorage. The plan is to remain for perhaps 48 hours but you never know what will happen when the sun drops. If the wind drops with the sun we are sure to be rocked so badly we will leave for San Quintin immediately. If the wind continues through the night we should have a nice set to the waves and enjoy a peaceful night. For now we are content and happy to be here.

Underway from Cedros Island with a destination of Fondeadero San Carlos. Approximate distance left is 65 miles. We expect to arrive just after noon tomorrow, October 10, 2013. Conditions are moderate with winds in the mid teens and the waves manageable without too much bouncing. If we can stay with these conditions we will be very happy campers to have completed this section of the trip. All is well except a small oil leak on the filter that we just changed. In San Carlos we will disassemble and replace the seals again. We guess we are leaking about a drop of oil every 10 minutes so not too much stress over this. Our position at 2130 is 28 30.770N by 115 11.500W.

We may have skipped over a portion of the weather the other day so are taking a personal day today to confirm what we think we know. A number of our friends are checking the internet for us but looks like we will be underway on the early morning tide. We really don’t know what the tides are doing but that sounded so nautical we had to add it.

Well once again we are alone in an anchorage. According to the guide books, the CIYC usually has a number of boats waiting for weather. Not so today. We pulled in this afternoon when the expected 27 knot winds started to rise up. We expect that 10 miles up the trail things are much nicer and we are planning to leave by sun rise tomorrow for San Quintin or a bail-out of yet another San Carlos. We don’t know who Saint Chuck is but he sure was popular for Mexican seafarers. Current position 28 20..228 N by 115 11.659 W. Sent Oct.8 203, 6 PMm

We’ve never lived in a tourist town.  Winters, though deeply part of God’s country just hasn’t been able to get out from the shadow of UC Davis or the Napa Valley.  Because of this we find it difficult to believe that towns virtually shut down during their off seasons.   We were not even aware that Turtle Bay had a “On” season but according to the folks in town it is similar to what we hear of in the State of Maine which is summer happens on the one weekend between May and September when the sun shines.   Bahia Tortuga’s season is the weekend that the Baja Ha Ha arrives. 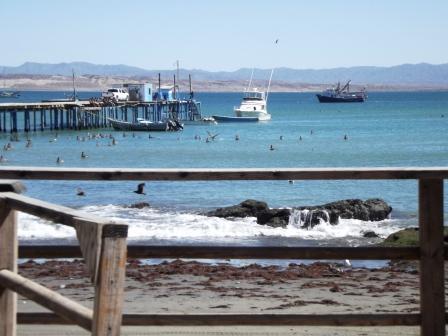 shack was closed but there were people running around cleaning, painting and generally sprucing up their palapas to make ready for the 500 or so cruisers who will arrive at the end of October.  We are not part of that pack.   As it turned out we found one place open for business where we could purchase a mediocre torta, so Bill is bummed.

On the plus side we have a nice weather window coming up and the Chick has also posted an update for your reading enjoyment.  Next stop is Isla Cedros and then on to Ensenada with a few stops in between.

Turtle bay, Bahia Tortuga, Torta Town (Torta = Mexican Sandwich, Usually fried with your choice of meat, cheese and special sauce. Famous in Turtle Bay by our accounts) . We have reached the half way mark. Had a very nice transit last night. Once we were with in sight of the harbor the wind kicked up to 29 knots for the last hour of the trip. We are safely anchored but the winds are still howling. We have ironed our bibs and will be heading to Torta Town soon. Arrival time 10:30 AM, October 6, 2013. 60 miles in 11 hours.  Not bad for a boat that weighs 1,000 lbs. per foot.

Asuncion, 50 miles short of half way home and a little bit of internet to boot.   Today’s trip was the way this bash 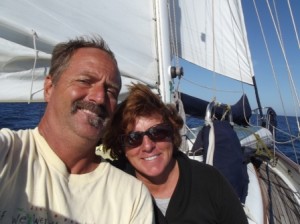 thing should have been all along.   We caught a nice off-shore wind most of the way up here.  The only unfortunate fact is that the trip was only 20 miles.   The off-shore wind allowed us to actually pull out the jib and sail along at about 6.2 knots or say around 8 MPH.   The seas were mostly flat and sun was shining the whole way. For a little bit of extra encouragement we were able to talk with our friend Bob who is currently on the other side of the Baja via ham radio for just a moment.

If the short notes didn’t indicate it, we had a tough trip out of Abreojos.   Most likely we should have waited till today to have made the journey from Abreojos to Asuncion, but it was nice to stop in on Hipolito just to see what it looked like.   The trip up from Abreojos included some fairly large wave sets, unfriendly sailing angles and because of the motion, no real breakfast or lunch till we pulled into Hipolito.  This all equates to fairly good fuel consumption due to the amount of hours running the engine.  To put it into perspective we usually run our engine at about 1700 RPMs.  Yesterday and today were normal engine run days but our speed today was at least double yesterdays, hence 50% fuel savings or less fuel burned per mile. 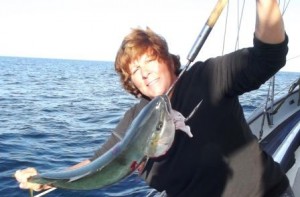 With the nice weather today we were able to get a hook out that back side of the boat and Lisa quickly got into a Yellow Fin Tuna.   She is such a baby about how big fish are that she turned the rod over to Bill to pull the fish in.   We guess the Yellow Fin weighed in at about 10 lbs, enough for two dinners and left over fish for Bills favorite, Fish Cakes.

Although we won’t go through the trouble of launching the dinghy, Asuncion looks like a nice town.   There is a Pemex fuel station (with diesel) here just up the road and we are told there are a couple of mini-marts and perhaps even a restaurant but we don’t see that from the anchorage.   Tomorrow will be our belly filling day.  The weather today is suppose to pick up to 20 knots in the afternoon but tomorrow it should be less than 15 knots the whole way to Turtle Bay were we will celebrate by having dinner at the most expensive restaurant in town and we will order from the right side of the menu! 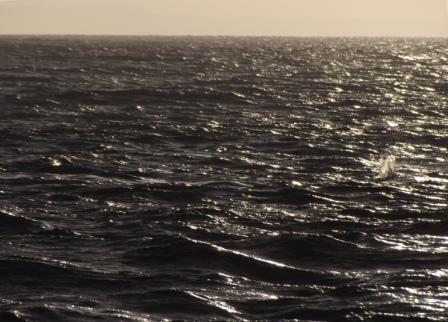 listened to the Bash Guru Jim Elfers when his book said to leave Hipolito just after sunset and catch the off-shore breeze.  We caught the breeze but could have been almost to Turtle Bay by this time today had we left earlier.  The breeze was up all night and although we had up to 25 knots in the anchorage we believe the breeze on the ocean would have been about 15 knots and very relaxing if we had just listened.

That’s about it for today. 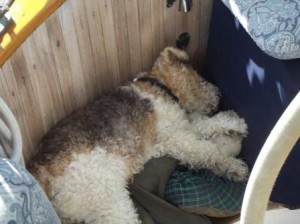 We will send a quick update tomorrow but if the plan unfolds as we expect the crew of Beyond Reason will be gussied up within an hour of arrival at Turtle Bay and spending incredible amounts of Mexican Dinero enjoying what we believe will be our last official outing in Mexico (sorry Ensenada, you just don’t count in our books as full blooded Mexican).

Hipolito was nice. Besides the lobster we got a good sleep. No internet, great wave protection i.e. sleep, and lotts of ocean breeze till that turns into an off-shore breeze and lots of that as well. We have updated our position on the FIND US button at the bottom of the page. Should have internet tonight when anchored. Position 26 58.971 by 114 03.809 W. Sent at 0845 Oct 5,2013.