We have arrived in Mazatlan. 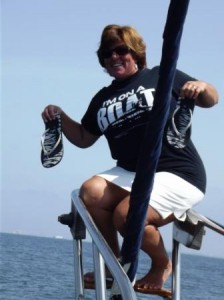 The trip was basically uneventful even though we did have a little excitement yesterday when we ran into a long line that is used to catch Marlin and other large fish.   Somehow we caught the line on our Bob Stay or as my brother affectionately calls it a “Cheese Cutter”.  This is the line that holds the bow sprite from being pulled skyward when we are sailing.  Anyway it hangs off the front of the boat and somehow caught this person’s line.  The line extended perhaps one quarter of mile on either side of us with thousands of hooks.

Lisa was quick acting and tossed Bill a 12″ kitchen knife to saw through the line before it had a chance to wrap around the propeller and all was well again.  The rest of the trip was just a motor boat ride in fairly calm seas.

The big news is that the Dude has posted his side of the little show we saw while in La Cruz.   It is fairly long but it is educational.   If you tried real hard you might get college credit for what you read but we are not making any promises other than it is bound to entertain and perhaps incite some emotion.

…What say the Bells of San Blas, 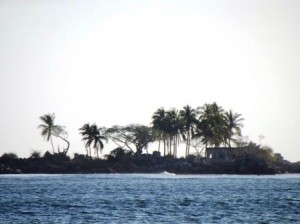 To the ships that southward pass from the harbor of Mazatlan? To them it is nothing more Than the sound of surf on the shore, Nothing more to master or man… Henry Wadsworth Longfellow.

We are in San Blas. Notable for Pirates, being over taken quickly when the Mexicans overran the Spanish that had originally settle the port here, the enormous amount of biting bugs and biting crocodiles and more recently banditos that are said to board boats in the night. If you surf there is the draw of a great surf break here.

Several years ago we anchored in this bay and it was just as quiet as could be. Today we have a bit of a surf running and if we had boards on the boat we could literally paddle a couple of hundred yards and catch waves. All is well on board though. We did have a bit of a problem today when one of our fan belts started chirping. As it turned out we are actually better sailors than we believe we are and while the engine was shut down to correct the belt we turned to sailing and eventually just left the dang thing off for the remaining 20 miles of the trip. It was all upwind sailing but the old gal (not Lisa) just plowed through the waves at about 6 knots in a fresh 14 – 18 knot wind.

It’s cocktail time now. We are still on Central time even though we crossed over the “Mountain time” line yesterday. No need to get in a hurry to change the clocks again and this way we get another hour of “sipping” before the sun goes down. It looks like tomorrow we may cruise out of here and make the overnight sail to Mazatlan. We are expecting winds from the West which should give us a nice angle. If the winds stay in the mid teens (they are projected 9 – 11 knots though) we should see Mazatlan by noon on Friday. If the winds just lay down on us we won’t see Mazatlan till the street lights come on and then we will have to decide to stay out an extra night, pull into the Old Harbor (more banditos) or anchor out at Stone Island (worlds best shrimp and garlic pizza). Time will tell, and you will be in Friday traffic anyway so most likely couldn’t care either way.

Looking forward to the weekend.