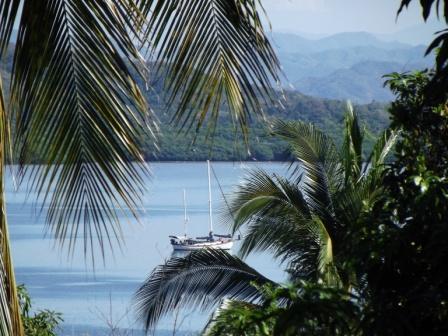 “No Senor there is a problem”.   We have heard this so much in the last 24 hours we were not sure we would ever get our Visa renewed or be able to leave the country.   We have completed the Mexican Paperwork to finally exit the country.   It was less than easy but we also could not say that it was that difficult either.   The key was finding someone with a sympathetic soul and an understanding of what it takes to move this boat from port A to port B.

After striking out with our “agent” in Barra de Navidad the other day we decided to take a bus trip into the big city of Manzanillo (approx 1 million people).   We encountered no issues on the trip into town and found that the taxi fare was certainly fare in comparison to other trips we have made via taxi (San Felipe comes to mind).   For only 50 peso’s we traveled about 10 miles around the city and to the Port Captain/Immigration office.  As directed by our “Agent” we went directly to the Port Captains office.   A security guard assured us we should report to Immigration, but we dismissed him and marched into the Port Captains office with purpose.   To exaggerate that we knew what we were doing we also took the elevator up to the third floor as directed by the agent and there found the administrative section of the Port Captains office.   We were quickly re-directed back to the first floor where the Port Captain himself directed us back to Immigration, so we took a ticket and sat down to wait for the next available Immigration clerk.

Prior to departing Lisa and I put on our best “traveling rich American Gringo clothes” to show a bit of respect for any Mexican Officials we would meet.   We find it important and believe that it has helped us in the past to show a respect for authority.   Of course the Office we entered was filled with Americans and Canadians in flip-flops, torn shorts and dirty T-shirts.   We were embarrassed by our fellow countrymen and neighbors, but quietly bit our tongues and waited till our number came up.   We met with Catrina Torres  and felt like we were making some headway when she called another office to get clarification of the extension we were requesting.   To our surprise she was willing to extend the Visa’s by 20 days.   Not quite what we wanted but better than nothing, so we held our breath while she explained that they would extend the Visa’s past the 18th of the month by 20 days but we had to return on exactly the 18th to get the extension.

Using our math the extension was only worth about 9 days more than what we currently had since it was the 7th and we had 11 days left till the 18th.   Catrina didn’t understand why we were not excited but said that was the best she could do.    Additionally during the conversation she said that we should report back to the ‘other” Immigration office on the 18th.   Apparently there are two offices in the area and one if for shipping and the other was the one we were currently working with.

Unfulfilled we left the office and began discussing how we would have to fly to the US and turn-around and fly back to the boat to get our Visa’s renewed.    Lisa thought we should walk to the “other office” before we left Manzanillo, so we did.   The trouble with this new office was that there was no English spoken so Bill had to explain in very poor Spanish that we were delayed in Puerto Vallarta for 30 days and that our boat was just to slow to move from Barra de Navidad to El Salvador in the 11 days we had left.   At one point we were sure we had struck out again, but on our second go around something hit home and he called another official.   Next thing we knew we were moving to another office with the immigration man (our passports in his hand) leading the way.    Twenty minutes later some piece of paper appeared and was signed by Bill and the Immigration guy and we were told to have a nice trip, all was good.   Well not quite.

Unsure of our status we returned to Barra to find the Port Captains office closed (hours from 0900 – 1400 daily).   We returned to the boat preparing for tomorrow when we would hopefully get the paperwork signed, and then make one more bus trip to Manzanillo (1.5 hours in each direction) and another 15 minute taxi ride back to Immigration to return the signed paperwork.

This morning we woke early and shuffled off to the town in the dinghy.   After a quick breakfast and a phone call to another “agent” that was trying to help us, we walked to the Port Captains office.   Again we discussed in very broken Spanish that we needed the papers signed so we could make our way out of Mexico.   All was fine till the Port Captain explained we would have to go to the back in Melaque to pay an exit fee.   Melaque is a quick 30 minute bus ride from Barra de Navidad, so Bill packed up his stuff and caught the next bus.   15 minutes at the bank got Bill the required proof of payment and he returned to the Port Captain.

The Port Captain examined the papers and declared “No Senor there is a problem”.   Of course there was a problem, there is always a problem but usually the problem can be solved, and so this was as well.    The bank made an error by entering the wrong account code to deposit our money into.   The Port Captain recognized this and offered to take Bill back to the bank to get it corrected.    Another 40 minute later we were granted permission to leave Mexico.

So we now have an Exit Zarpe with an introduction to some port in El Salvador and the caveat that we might have to stop in intermediate ports along the way to get fuel or supplies.   The way we look at it this was the best of all possible out comes.   We are not beholden to an exit date so weather issues can be respected, and when we reach El Salvador we should be welcomed with open arms.

We hope to leave Barra de Navidad tomorrow or the following day after getting supplies.

We have had dealings with Mexican Customs before but yesterday brought to light that we are in a foreign country and that this country although much more lenient than our own in many ways still has it’s rules, some of which they will not bend. Our current tourist visa’s are about due. 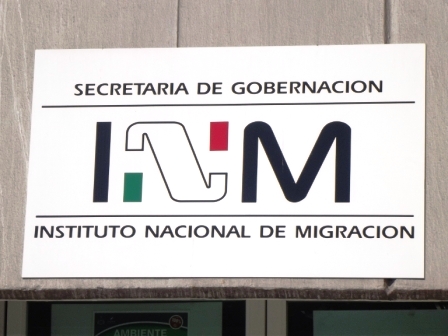 Previously we were close enough to the United States to just take a bus ride over the boarder and then return to Mexico for an automatic upgrade or extension. This time we are not so lucky.

When we look at a map we are over 1,000 miles from any national borders. We discussed our predicament with an agent yesterday and told them that we need about 30 additional days to transit the rest of Mexico in safety (weather issues down the coast and across the Teuantipec). We would actually hope to get an additional 60 days since we really don’t want to miss parts of Mexico that we have not seen before. When Bill finished with the agent we were still at square one, but fairly resigned to buy plane fare, bus fare or donkey cart fare back to the States.

Lisa has gone to work using her network of friends to locate the cheapest air fare available. Things don’t look so bad this morning but the thought of dropping $600 to get 180 more days in Mexico still is not a happy thought. We do have one last bullet to use and that will be on Monday when we go to the Port Captain in Manzanillo. We will explain that we were delayed in Puerto Vallarta for rigging issues for nearly a month. That month if recovered could give us just about enough time to make it to El Salvador and save us $600 worth of beer funds.

We have been working on trying to get our Ham Radio to do updates on the website. This was one of the primary reasons for switching over from 1and1 and we have now completed the necessary changes to make that happen. This one is really just a test but soon we will be updating from locals far and wide. Enjoy your commute today, the weekend is just around the corner. 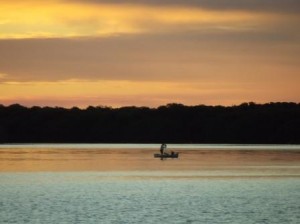 Today is the day after the “Big Storm of 2013”.   Most of you see those headlines on ABC, NBC or Fox after nearly every storm that comes through in the winter.   We don’t get ABC…so we thought we would create our own headlines.   We have had rain here in Barra for the last couple of days and yesterday we had 15 minutes of near white-out conditions where we couldn’t see 100 feet from the boat because of the rain.   Our estimate was about 6″ of rain for the day and perhaps half of that came in 15 minutes.   Of course we couldn’t just have rain, so we added 34 knots of wind to the mix just to make it exciting.

Our spirits were not dampened by the weather and we still had friends over for dinner.   When they arrived it was during one of the deluges  that had been happening all day so they were soaked pretty good.   The boat was dry and everyone had brought dry clothes and after changing we had a great time.   Today broke nice and bright, the 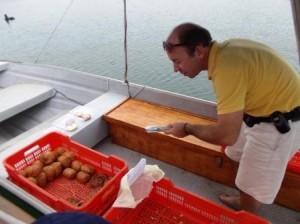 French Baker appeared at the boat as he usually does each day around 9 AM and the day looks perfect for the beach, a walk and perhaps a cerveza of two.

We have been using the facilities here at the Sands Hotel for Internet.   Beer is $1.50 each, the accommodations are nice, and the electrical is average for Mexico. 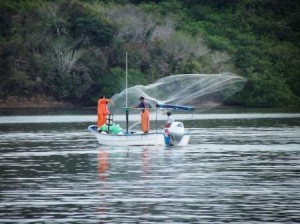 We are working on getting our Visa’s extended still.   Each day we march over to the “agents” office get a bit closer to success.   We are looking forward to Monday when customs actually opens and hopefully 200 pesos will solve our issues.

No new updates at this time but all is going well.